Agatha Prenderghast, nicknamed as Aggie, was an alleged witch whose curse haunts Blithe Hollow. She is the main antagonist (formerly) in the story ParaNorman. Initially introduced as an evil and malevolent witch, she was actually only an innocent little girl. Aggie was accused of witchcraft in 1712 and executed because of her ability to speak to the dead. This caused her to curse the seven judges of her trail in anger.

Agatha lived with her mother in Blithe Hollow, Massachusetts. Much like her distant relative, Norman Babcock, she can see the dead and also speak to them. Her ability caused people to become more and more distant from her to the point that they were led into believing that she was a witch and the people were led into take her away from her mother and was sentenced to be executed by the judge and was later hanged. Angered at the judges' accusation, as she didn't do anything wrong, Agatha cursed those who testified against her and her curse continued for three hundred years. However, every year, someone, who has the same ability as her, is obliged to read a book to put her to sleep before her curse begins, delaying it by one year. It is presumed that other Prenderghast mediums all the way down to Norman's great-uncle Mr. Prenderghast were the ones that did so.

Throughout the events of her death's 300th anniversary, what had happened to her became famous, but was only believed to be a myth. Due to the stories and circumstances surrounding her death being twisted by the public view, even Norman thought she was evil. However, when he discovered that she was only actually an innocent girl who was sentenced to death for her ability to speak with the dead, he became disgusted at the cursed seven for their misunderstanding of her ability. The Seven, however, were regretful and that they are disappointed in themselves and are sorry for what they had done to her. The Judge had admitted that he only thought that he was doing what was right, but he was wrong.

At the end, Norman finally faced Agatha, talking some sense into her by telling her story he'd put into his own words after she'd burnt the real book used to put her to sleep. He accused that she was the same as them, that she, too, was a bully. Agatha disagrees, but she later realizes that what Norman had said was exactly the truth. He told her that although they did something awful, it doesn't mean that she should, too. And she has to remember. Not just the bad people, but also the good ones that she'd forgotten. Aggie reminisced to Norman that, before she died, her mother took her to a tree, the same one that she was buried under. There, her mother told her stories that always had happy endings. Aggie was able to find the peace that allowed her to finally lift the curse and move on to the afterlife, along with the seven who had wrongfully accused her of witchcraft.

Aggie is mostly a girl with a sweet, modest demeanor. However, when the judge and his underlings convicted her, her fear and uncertainty gave way to pure hatred and rage, unleashing her power on them. She also despised hearing the story that was being read to her, as she confessed contentment to the book's destruction. She feels that those who have wronged her deserve the same, and she refuses to see her own wrongs, even when Norman is telling them to her. In the end, she learns how to let go of her pain and passes over to the next world, hoping to meet her mother once again.

Agatha is depicted through effigies and the school play Norman is in, as a stereotypical old witch with a pointy hat, a long nose (with a noticeable wart on it) and a long chin, she also has a statue with that appearance. However, her real appearance is actually a little girl, whose age is no older than Norman, with long blackish brown hair, pale blue eyes, pale skin, quite thick eyebrows, and wears a dark grey dress with a white collar and red shoes.

To the seven judges

She has been chained.

Norman tries to defend her.

The confronted prisoner starts to glow

Aggie about to curse the seven judges

Agatha's witch form in the trailer 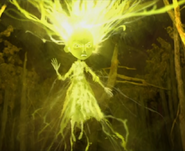 Aggie making duplicates of herself and pushing Norman around with them. 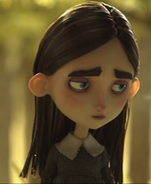 Aggie destroying a butterfly with her eyes flashing in anger.

Aggie after realizing she destroyed a butterfly.

Aggie crying towards the tree

Norman and Aggie standing under the tree

If you look closely, she really has blue eyes.

She has become humble in a way.

Aggie sleeping next to Norman

Aggie gets taken to the afterlife

The Witch's Statue after Aggie destroys it.

Aggie in the credits
Add a photo to this gallery
Retrieved from "https://paranorman.fandom.com/wiki/Aggie_Prenderghast?oldid=6781"
Community content is available under CC-BY-SA unless otherwise noted.